Woohoo, my Macbooks internal HDD (Hitachi Deathstar… oh… I'm sorry… Hitachi Deskstar) somehow broke. While browsing the net, everyhing froze and I had to reboot. Rebooting resultet in a "couldn't read yadda yadda"; message after 20 seconds and nothing happened after that, it just looped.

It wasn't a headcrash, it was just… well… I don't really know what it was, something broke and I'll get a new HDD :).

Anywhoooooo, luckily I've got a nice 750 GB HDD on my Airport Extreme which my macbook pushed Timemachine backups to until the bitter end. I used the backup made 2 hours before the disc went down the crapper and restored it on a 60 GB 2,5" SATA disc I still had in an external enclosure (1,3 GB of the 60 GB are still free).

What can I say, everything worked 0_o

I'm still searching for things that don't work, but so far, everything is there. The only thing that's missing is the Spotlight-index which is being rebuilt as we speak (wouldn't make any sense backing the index up anyway…) 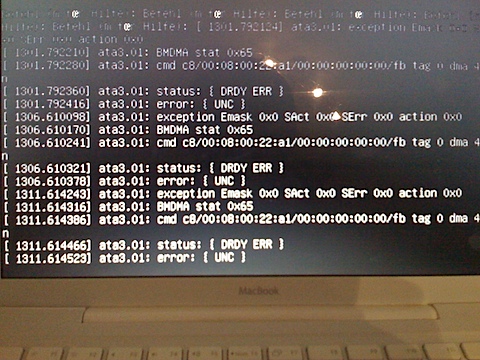