ok, I finally changed to a them that is up to the current wordpress-widget-stuff :)

I'm also giving disqus a new try. Version 2.0 of the plugin automatically syncs with the wordpress database, so plugins aren't "disqus only";. Now I've just gotta figure out if they support something like "notify by email"; for answers…

The old comments should be imported to disqus within the next few hours.

Auto-sync for new comments between wordpress and disqus seems to be working fine!

Just commented on this post using the disqus featue and it's also in the Wordpress database. 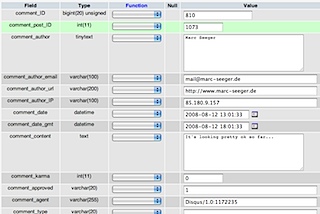 Update 5: some emails and an updated plugin later: