Ok, I decided it's time for something new to play with :) 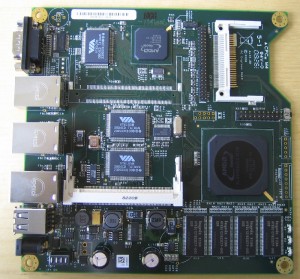 It's a small (15×15cm), low voltage system board made by PC Engines
The model I chose, 2d3 has the following specs:
* CPU: 500 MHz AMD Geode LX800
* DRAM: 256 MB DDR DRAM
* Storage: CompactFlash socket, 44 pin IDE header
* Power: DC jack or passive POE, min. 7V to max. 20V
* Three front panel LEDs, pushbutton
* Expansion: 1 miniPCI slot, LPC bus
* Connectivity: 3 Ethernet channels (Via VT6105M 10/100)
* I/O: DB9 serial port, dual USB port
* Board size: 6 × 6″ (152.4 × 152.4 mm) – same as WRAP.1E
* Firmware: tinyBIOS
Thanks to the 3 ethernet jacks, I will be able to replace my DSL router with it. It's power consumption is about 5 watts when being under load. The operating system will be run from a 1 GB CF flash card which comes with the bundle I bought from varia store.
There is an article in German over at toms hardware, describing√Ç¬† the installation process of the embcop Linux distribution.
I think I'll try to use pfsense in the beginning. Maybe even try ubuntu…

Things I am going to try:

Adding a miniPCI Wlan card:
I basically only use Wireless LAN with my Laptop, so it would be nice if the alix could serve all my wireless needs as well.
I don't know how well the newer intel chipsets√Ç¬† (e.g. the intel 5100 agn) will work on linux/*bsd and if 11n is actually supported yet, but I guess I'll find out.
On the downside, I'll have to drill holes for antennas myself…
I might even think about buying a simple access point, but I don't think the extra watts will be worth it.

Use a proper filesystem on my external HDD
My dream setup would be FreeBSD on the alix and zfs on the HDD. I'm not sure if the 256 MB RAM will be enough for the, apparently, RAM hungry ZFS.
Maybe I'll use NTFS with ntfs-3g to be able to use the windows internal backup tools. I'd prefer ZFS by far, but we'll see.
If both of them don't work, ext4 should be fine…

Installing and running a torrent client
Probably rtorrent downloading directly to the external HDD. Should be enough power to do that.