I recently bought a Smart Q7 Tablet.
It features a 7 inch touchscreen, a proper USB Port (host mode!), WLAN, a headphone jack (+ a speaker) and an SD card reader.
Hardware wise, it is driven by a 667 MHz ARM CPU, 128 MB of RAM and 1 GB of internal flash.
The operating system it features out of the box is Ubuntu Linux. There is also the possibility to run Windows CE (you've got to buy a license for about 15 Euros) and there are even (so far) unstable ports of android available.
The great thing about this toy is, that it's only 210 USD. I bought mine from mp4nation 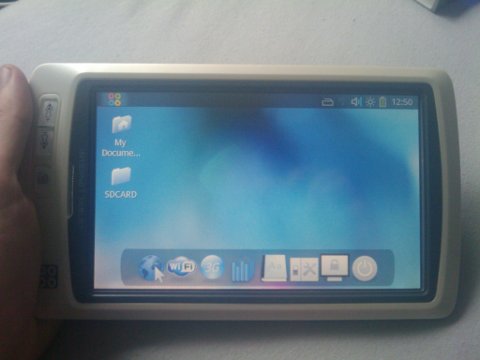 For some strange reason, I decided to flash a version of Android for the Smart Q5. I thought giving it a try can't hurt and I might be able to see at least some sort of kernel errors.
I thought that, as with my G1, the flashing process would only involve the system partition and not touch the bootloader (and therefor the recovery mode) what so ever.
Sadly, the flash process just immediately quit with 3 chinese symbols and an exclamation mark. The onbly possibility I saw was simply to push the reset (aka reboot) button and see if the old OS would come up again.
Strangely enough the device didn't completely reboot, but got stuck into a strange mode where the LED on the left only was shimmering slightly greenish and I wasn't able to get into any other mode any more. Pushing the reset button didn't do anything, neither did plugging in the charger.
Long story short, thanks to the friendly people (especially Stskeeps) on the #mer channel on Freenode IRC, I got my device running again.
The thing is that the SmartQ series is almost unbrickable. Even with the internal flash in total disarray, it will look for a bootable SD card right after boot (or in my case: upon push of a button).
To create a bootable SD card, you can either:

After copying the official image (the file called "SmartQ7"; from the official homepage) on that SD Card, you are good to go.
Using this card, the smart q will respond to pressing the upper right button after plugging in the carger when reset is pressed.